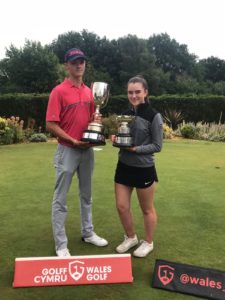 West Wales golfer Carys Worby made up for the disappointment of being left out of the Wales team for the European Masters by winning the Welsh Girls title.
While Cardiff schoolboy Ben Davies claimed the Welsh Boys title, both players putting in a series of impressive performances at Newport golf club in Gwent.
It was Newport Links, in Pembrokeshire, player Worby who dominated the Girls section, beating Radyr’s Alice Thomas 2&1 in the final after getting off to a fast start going three up in the first six holes.
“I didn’t get picked for the European Master this year, having played the last two years, so some people might say I had a bit to prove but I really enjoyed the Welsh Girls,” said Worby.
“I know it is a good tournament so I was excited rather than nervous coming in. The win has helped my confidence a lot after not being picked, with a lot of big events coming up.
“I like the course but it does not favour longer hitters so I was playing safe with irons off the tee.
“We were at the European teams championship last week so I knew some of the girls were playing really well.
“I had more comfortable matches than some others, the semi-final was the only one which went down the 18th. So things went well.”
That semi-final was against Eleanor Willis of St Pierre, Worby wining by two holes, while Thomas beat Welsh Amateur champion Lea-Anne Bramwell by one hole in the other semi-final.
Worby has the English U18’s, the Home Internationals, if selected, British Girls and English Amateur coming up, so she has a busy time coming up.
Southerndown’s Davies beat Wrexham’s Matthew Sandoz 3&2 in the Boys final, getting through all his rounds without reaching the 18th hole.
He also has a busy time ahead with the Welsh Amateur in Machynys next week. “I just kept hitting greens and putting putts close, the greens were quick so I had to have good pace control,” he said.
“The final was close, we both had holes where we did not hit it so good, until I nudged ahead winning the final two holes.
“I am ecstatic to have won, it is starting to sink in now and it is a really good feeling. I did feel under pressure because I am not as confident in match play as stroke play, so I just tried to shoot a good score as though it was stroke play.
“It is the Welsh Amateur next week and I will be more confident knowing I have put in six good rounds here so I hope I can keep that going.”
Wales Golf championships manager David Wilson added, “Congratulations to both Carys and Ben, they came into the event with high expectations and certainly lived up to them.
“It was great to see so much good golf being played across the main events and the plate events by the best up and coming golfers in Wales.
“The Newport course was in excellent condition and provided a fair but tough test for all the players. Once again the change to running both the Girls and Boys events over the same course at the same time has been a resounding success.”