Two players who bounced back from the disappointment of being left out of the Wales European teams, came through to win the Welsh Girls and Boys titles.

Ellie Willis from Chepstow and Swansea’s Dylan Thomas both played in the Wales Home Internationals teams last season and took advantage of the time this summer to work on their game ahead of the Girls and Boys Championships, held jointly at Carmarthen golf club.
Both came out on top against players who had been in the European Team Championships in the final, Willis victorious over Isle of Wedmore’s Harriet Lockley and Thomas beating Pyle and Kenfig’s Tom Peet.
“It’s a bit surreal,” admitted Willis after her victory. “I had not had the best season so far, so I had no expectations coming here, I just wanted to play well and do my best against some really good internationals. 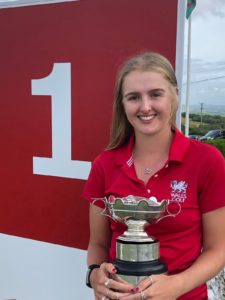 “I played well in the stroke play so I had belief in myself coming into the match play and blocked the pressures out of my mind.
“I was in the European and Home International teams last year, which was a boost for my confidence too, but then I went through some swing changes which were a bit of a slow burner.
“I learned a lot from those events, especially about the mental side of match play and I think I found those processes really helped me.”

Willis, aged 18, works in the Pro Shop at St Pierre but now plays out of Bristol and Clifton golf club. She is hoping to earn a golf scholarship in America, also studying strength and conditioning.
She beat Ham Manor’s Ellen Nicholas inn the semi-final, Emily James of Royal Lytham and St Anne’s in the quarter-final, while Lockley overcame Radyr’s Alice Thomas in the semi-final and Southerndown’s Emilie Lewis in the quarters.

Thomas also took advantage of the last few weeks to work hard on his game, seeing that effort pay off.
“It feels amazing,” said the 16-year-old Pontardawe member. “I was disappointed not to make the European team so in the three weeks since then I have worked really hard and played well in the last couple of weeks.
“I am good friends with Tom, we talked all the way round, but it helped me that I got ahead early.” 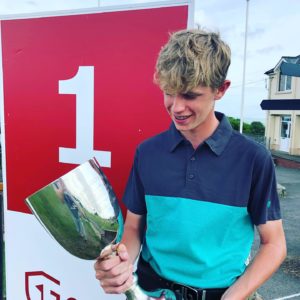 Thomas is still eligible for the Under 16’s age group and hopes this win will help him gain selection for the Home Internationals in Ashburnham. He also has long term ambitions to study in America.
He beat Alex James of Royal Lytham and St Anne’s in the semi-final and Kedleston Park’s Henry Hayward in the quarters. Peet beat Toby Bishop of Trump International Dubai, who won the stroke play event, in the semi, Bryn Thomas of Cilgwyn in the quarters.

“Carmarthen was in fabulous condition for these events, two of the most important championships Wales Golf runs each year,” said event director Sandy Veale.
“Congratulations to Ellie and Dylan, but also huge thanks to all the staff and volunteers at Carmarthen golf club who helped make the event such a success. “There was a really high standard of golf throughout, the course proving a fair test for everyone involved.”