Golf a life-changer for award-winning Tom 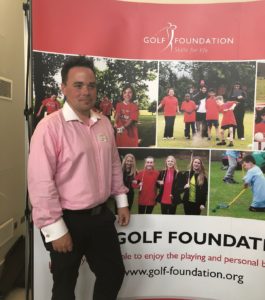 (For free to use pictures, please download from the following link https://we.tl/zYXANCVVsn . Picture captions at the end of the article.)

Tom Bowen has golf to thank for the chance to pick up the Golf Foundation Gallacher Award in a star-studded ceremony at Wentworth – but, more importantly, he has golf to thank for getting his life back
The North Wales club assistant professional has done impressive work as a volunteer, before starting his PGA qualifications, but maybe more important is the central part golf has played in helping him get over severe anxiety and depression.
So simply going to Wentworth for the awards ceremony showed the change in someone who went from being a successful salesman, to plumbing the depths of depression and finally getting back out there through a combination of determination, medication, therapy, support – and golf.
It is an inspiring story and one that Bowen is happy to share because he believes golf can help others in a similar situation in the same way it has helped him.
“It was a fantastic experience getting to go to Wentworth and mixing with all the people there – I got a lot of signatures from celebrities, it was nice to meet a few big-wigs,” explained the North Wales golf club assistant professional.
“When I started I was a long way from thinking about anything like that. In 2008 I was diagnosed with severe depression and general anxiety.
“I was able to maintain a job and some social things, but then in 2012 I had regressed so much in my illness that I ended up being housebound until 2016.
“In 2016 I decided to come out all guns blazing. It was an existence I was living rather than a life, I could either get better or could have ended it all.
“In January I started walking my dog to the post box, then to the end of the road, then round the block, then being away for 20-30 minutes.
“Then I started doing the same in my car, going to the end of the road, round the block, to the petrol station.
“Then I made it to the golf club in April 2016 and it turned out the members and staff had missed me. That was a shock and the starting point to getting better.
“I started volunteering to help the ground staff, doing bunkers, replacing divots, just to get out of the house.
“It was so nice to be outside and not be scared, so I started playing a little bit again.”
Bowen had been a good golfer, a category one player with a handicap around five, but obviously that was then.
“I would play a few holes, but not go too far,” he said. “In August 2016 I played 18 holes for the first time in four and a half years, which was four and a half hours away from the safety of the clubhouse.
“It was the end of the summer, not so much to help the ground staff with, so I started helping the junior coaching programme.”
Leading those schemes was Robin Hughes, who himself became the Wales Golf club professional of the year this year thanks to the remarkable work he has done giving thousands of youngsters the chance to try golf.
“Anything Robin was doing, I was there to help him,” said Bowen. “The programme exploded, we could not believe the number of renewals early in 2017, we were getting 25-30 kids every Saturday morning and the social media interest grew.”
It was that work as a volunteer, and the story of what it had taken to get there, which earned Bowen the Gallacher Award. But there was one last piece of sadness to cope with.
“My Dad was the person who got me into golf and he had been ill for three to four years. I think he was fighting on to see me get better,” he said.
“He passed away in February and then a few weeks later I got the letter from the Golf Foundation.”
It is a story with a happy ending, with golf as the central feature of that recovery. “It is one of the only sports where you can play together with anybody regardless of ability,” said Bowen, to explain why golf in particular was so good for him.
“Being outside was a barrier for me at first, but when I got over that it was good to be outside in the sun, there is a confidence in being outdoors in the beautiful scenery and golf gave me a reason to do that.
“One of the big health benefits that all the golf and volunteering gave me was I lost three and a half stone between January 2016 and April 2017.
“Now I have a target, an aim to get my PGA qualifications in the next three years and then the world is my oyster.”
It seems the Gallacher Award could be a start. 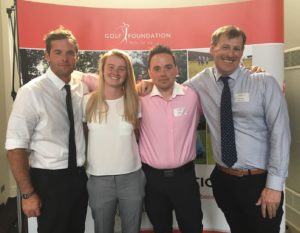