We were treated to a titanic battle on a day when conditions really tested the players at the 2018 Home Internationals. In the title decider between Ireland and England the opening exchanges in the first three games of the morning foursomes were nip and tuck as the players tried to get their country off to a fast start in the battle for the coveted trophy. Ireland looking to defend their title made their mark first in game four, as Cannon and Sugrue moved into an early two up lead for Ireland. In the final game the strong Irish pair of Mullarney and McLarnon were also playing well and moved to three up after seven holes against Poppleton and Gill so giving Ireland an early advantage.

In the top game a birdie on the tenth gave Dawson and O’Keeffe a slender lead which they extended to 2up after twelve and at this stage the momentum was firmly with the Irish. However, the English pair of Wilson and Hague came back strongly winning four out of the last six holes to win 2up on the eighteenth including pitching in for eagle on the final hole.

The match of the morning featured the unbeaten pairs of Purcell and Power of Ireland and the two Toms, Plumb and Sloman from England. The Irish pair were two under par through nine to be 1up, extending that lead to two through another birdie on the tenth. Still one up after seventeen the point looked to be heading the Irish way but a birdie three for Plumb and Sloman on the last gained the English pair a battling half. 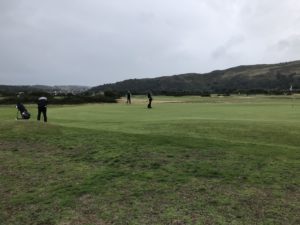 Waite and Long from England took a 2up lead into the back nine in their game against Rafferty and Yates. Three further birdies on the back nine for the English pair helped them to a comfortable 4&3 win.

After at one stage looking like they would take a healthy advantage into the afternoon singles Ireland were now behind on the scoreboard but looked like taking the final two points with both pairs comfortably ahead at the turn. Cannon and Sugrue extended the advantage they held in their game with two birdies on the back nine as they closed off a 5

&4 win, with Sugrue maintain his unbeaten record in the process.

Game five proved to be a lot closer with both Mullarney and McLarnon and Poppleton and Gill under par on the back nine with Ireland levelling up the overall match after the Irish pair birdied the seventeenth to close off the match 2&1.

With the overall match perfectly poised at 2.5 2.5 and with everything to play for in the singles it was England who made the better start with Waite and Wilson taking useful early leads in their respective matches. Power, two up after five helped to redress the balance for Ireland with all other games very close after the opening holes.

Andrew Wilson registered England’s first point, three under par and six up after nine holes soon became a 7&6 win for the English player.

In the top game Ireland’s Robin Dawson produced four birdies in five holes on the back nine to claw back a two hole deficit with four holes left to play. A birdie on sixteen turned the game back in favour of Mitch Waite and he clinched the win with a three on the last.

Mark Power and Tom Sloman exchanged a barrage of birdies on the back nine in the match of the afternoon with Power eventually prevailing on the 18th to win Ireland’s first point from the singles.

As the middle games started to complete, England’s Tom Plumb recorded a solid 3&2 win over James Sugrue. David Hague looking to win his 6th point of the championship had to battle hard in his match against Ireland’s  Caolan Rafferty but, with three birdies on the back nine, he eventually prevailed by 2&1 to secure his 100% record and another point for England, extending their lead to 6.5 – 3.5. Joe Long was six under par in beating Robbie Cannon 3&2 to take England to the verge of victory.

A 3&2 win for Peter O’Keefe against Nick Poppleton kept Irish hopes alive but not for long as David Langley claimed a 2up victory over Ireland’s Alex Gleeson so taking England over the line.

In the remaining two matches Ireland’s Tiarnon McLarnon beat Ben Jones 3&2 to maintain his perfect record for the championship; six out of six. Ronan Mullarney produced three birdies in the last five holes to overturn a three hole deficit and take his match 1up but from an Irish perspective it was in vain as England won the Match 8.5-6.5 and with it the 2018 Home Internationals.

Congratulations to Team England winners of the 2018 Home Internationals.

Scotland on top in tough conditions

Damp and windy conditions greeted the players for the final morning of the 2018 Home Internationals. In the first match out on course Scotland took on Wales to decide the third and fourth place positions.

Scotland had the best of the opening exchanges in the tough conditions, up in three of the games and down in just one with the Cantley and Fyfe match against Williams and Harman being all square. 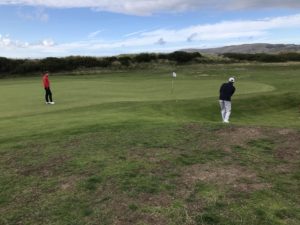 By the turn steady golf from Hapgood and Davies, and Williams and Harman saw them take 1up leads into the back nine against their Scottish counterparts. Scotland though were performing strongly in the final three games being two and three up in these games after eight holes.

In the top game birdies on eleven and fourteen helped Hapgood and Davies to a 3&1 win over Roger and Wright to give Wales the opening point in the morning.

In game two Cantley and Fyfe and Williams and Harman exchanged birdies on holes nine-eleven but the match remained all square. A birdie on fifteen took the Welsh pair ahead but three pars over the final holes for Cantley and Fyfe were enough to finish the game in Scotland’s favour.

Scotland were convincing winners in the final three games. Lumsden and Ryan were pretty comfortable throughout their game eventually closing out a 3&1 win over Chamberlain and Sanges to earn another point for Scotland. Birdies on eight, nine & ten took Johnston and Wilson to 4up in the fourth game on their way to a 6&5 win over Brown and Roberts. In the final game Walker and Easton went four up with three birdies in four holes from the sixth a lead they held on to finish winners by 4&3.

In the singles Wales got off to a fast start as they tried to overturn the 4-1 deficit from the morning foursomes. With Wales up in five games and all square in three with all games through four holes the overall match was very much in the balance.

But it was Scotland who put the first point on the board, three birdies in five holes helping Ryan Lumsden to a 4&3 win over Jake Hapgood. However with Wales no worse than all square in all the other games a Welsh comeback was well and truly underway.

Four birdies in six holes helped Ben Chamberlain turn around a three hole deficit after eight and claim the first Welsh point of the afternoon with a 3&1 win over Calum Fyfe. Consistent play from Paddy Mullins helped him to pull away from Kieran Cantley after the turn with a 3&2 victory leaving the overall match score five-three in Scotland’s favour.

Matt Roberts then added a third Welsh point with a 3&2 win over Jim Johnston. Two tight matches followed with Euan Walker edging out Wales’ Tom Williams 2&1 and Kieran Harmon earning another point for Wales with a 1up win over Stephen Roger. Match score six-five to Scotland with three games still out on the course.

With Wales’ Gaelen Trew three up after fourteen looking likely to claim another Welsh point all eyes were on the penultimate game. If Scotland’s James Wilson could hold on to his one hole lead the match would be theirs. 1up down the last and a stunning pitch from Wilson to within inches of the hole secured his birdie, the game and an overall match win for Scotland.