Defending Champions Ireland up and running in defence of their title.

After heavy overnight rain, dry but blustery conditions greeted the players on day one of the 2018 Home Internationals at Conwy (Caernarvonshire) Golf Club. We were led off at 7:45 by Peter O’Keeffe of Ireland, winners of the Home Internationals in 2017 looking to repeat last year’s success. They will be pleased with how they have started their defence as they enjoyed a 4-1 win over Scotland in the first morning’s foursomes matches.

A good start is always important and Scotland’s Euan McIntosh and Ryan Lumsden took the top game 3&2 but despite this early defeat Ireland responded by convincingly winning the remaining four matches. 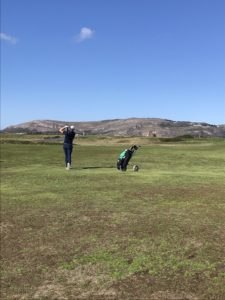 on recording  a 5&3 victory, playing their last seven holes in two under par.

Caolan Rafferty and Alex Gleeson traded birdies on holes nine, ten and fourteen with Scotland’s Jim Johnston and James Wilson on their way to a 3&2 win.

Robbie Cannon and James Sugrue were three under par, aided by five birdies in their last eight holes, in their win against Kieran Cantley and Calum Fyfe.

One up after nine, Ronan Mullarney and Tiarnon Mclarnon realed off three birdies and an eagle in the next five to take the final game in the series by 6&4.

After Ireland’s excellent morning performance Scotland had it all to do in the afternoon singles as they looked to turn around the 4-1 deficit. Hopes of putting early pressure on Ireland were immediately dented as Robin Dawson took the opening singles match 5&3 with a blemish free score of five under par for his fifteen holes.

Scotland’s Euan Walker produced four birdies in a row from the 11th to win his match against Mark Power and claim a point for Scotland to make the overall match score at that point 5-2 in Ireland’s favour.

However wins for Jonathan Yates with six birdies in his 5&4 game, Conor Purcell and Caolan Rafferty quickly gave Ireland eight game points so putting the match out of Scotland’s reach with five games still out on the course.

In the remaining games Scotland’s Jeff Wright pulled away to a six up lead after ten holes before eventually beating Ireland’s Robbie Cannon by 3&2 and Johnston and O’Keeffe tied their game, However wins for Sugrue, Mullarney and McLarnon completed Ireland’s dominant performance

In the second match England and Wales fought hard all morning and at the end of the morning’s play it was honours even with both sides sitting on 2 ½ points a piece.

In the top game England’s Andrew Wilson and David Hague were never behind in their game against Tom Williams and Jake Hapgood eventually recording a comfortable 4&3 result. Although they did have to fend off a charge from the Welsh pair around the turn 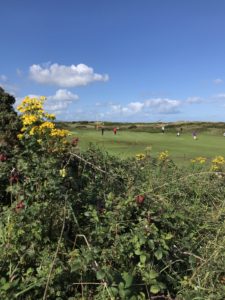 when they briefly wrestled the game back to A/S.

Wales struck back in game two, all square after seven, Matt Roberts and Paddy Mullins won 5 unanswered holes in the next eight for a 5&3 win.

Sloman and Plumb looked comfortable at three up after thirteen before the Welsh Pair of Chamberlain and Sanges struck back with an eagle on fourteen, a win on the 15th and a birdie three on the last to grab a battling half.

In game four Nick Poppleton and Bailey Gill eventually came out on top in a tightly fought game with Kieron Harmon and Oliver Brown. Poppleton and Gill won 2up on the last after the welsh pair found trouble in the gorse going for broke down eighteen.

In the final game of the morning birdies on fourteen, fifteen and sixteen were sufficient to turn the game in favour of Gaelen Trew and Archie Davies, the Welsh pair recording a 2&1 win to leave the overall match between England and Wales perfectly poised with everything riding on the afternoon’s singles matches.

England and Wales started the singles with everything to play for after tieing the morning foursomes. The opening matches were nip and tuck through the front nine but with England slowly gaining the upper hand.

The first point on the board in the afternoon singles went to England courtesy of Tom Sloman’s 3&2 win over Ben Chamberlain quickly followed by a second when David Hague overcame Wales’ Jacob Davies 3&1.

In the top game between Mitch Waite and Tom Williams there was never more than a hole in it with Waite taking it 1up. Another tight game went the way of England when Andrew Wilson birdied the last to edge out Jake Hapgood.

All of a sudden England were leading 6.5 to 2.5 with victory nearly assured. That was confirmed a little later when Tom Plumb pulled away in the closing holes to defeat Matt Roberts 2&1 and David Langley took the decisive point in a 2 holes victory over Archie Davies.

With England having won the first six of the singles matches Wales were keen to turn some of the closing matches their way, indeed six of the matches went down the eighteenth. As conditions calmed for the players left on the course Kieran Harmon looked to have pulled off a remarkable comeback by getting back to all square after 16 having been four down after nine against Bailey Gill only to lose 1 down to Gill’s birdie three on the last.

Five birdies on the card helped England’s Jones beat Trew 4&3 in the final game and with Jake Burnage beating Lewys Sanges in another game that swung to and fro it was left to Paddy Mullins to salvage a point from the singles for Wales with a 2up win over England’s Nick Poppleton.