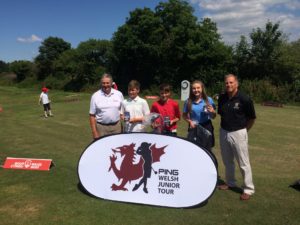 Pontardawe’s Ioan Rowe claimed first prize in the U14s age group at the Ping Welsh Junior Tour Event at Carmarthen, taking him top of the Order of Merit.
Ioan’s score of 37 stableford points was just enough to edge Milford Haven’s Joel Mills into second place, with Dwynwen Holgate from Cardigan in third. Dwynwen is just a couple of points behind in second on the Order of Merit.
William Pontin, from Pyle & Kenfig, a regular winner in the U10s age group last season, recorded his first victory in the U12s with an exceptional score of 61 points, three clear of Kian Orford and Thomas Richardson in second and third respectively.
William’s strong performances all season place him in a very good position at the top of the U12s Order of Merit.
In the U10s, Swansea Bay’s Fallon Sawyers-Grandon took top spot with a score of 56 taking him to the top of the Order of Merit.
Harry Edwards from Builth Wells and Paul Reid from The Glamorganshire also produced fine performances to take the next two places.
With one more event to go this season the race to win the Order of Merit in this age group will be keenly contested.
Having won the first three events of the season in the U8s, Milford Haven’s Tomas Carlson was edged into second place by Gethin Hatcher from Abergele.
Having already had two second place finishes this season Gethin made the long trip from Abergele worthwhile with his first Junior Tour win.
The pair were just a point ahead of Ashburnham’s Sam Houston in third. Tomas’ outstanding season to date has already secured him the U8s Order of Merit title with one event still to go.
Ashton Bradbury, Chairman of Championships for Wales Golf, said, “We have had a great day at Carmarthen who have again been perfect hosts for this event.
“Many congratulations to all the prize winners but more importantly we hope that all the players enjoyed their day.
“The Ping Welsh Junior Tour, now in its third year, is continuing to grow and we very much look forward to the next event at Abergele GC before the end of season Tour Final at Wrexham GC.”