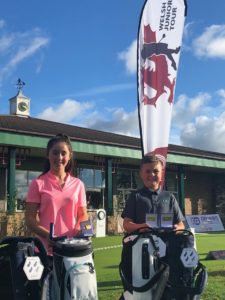 It was a girls one/two against the boys as 80 of the best young golfers in Wales took part in the Ping Welsh Junior Tour finals in Wrexham.
Llanwern’s Lottie Raymond won the U14’s age group in convincing fashion with a score of 41 stableford points, a fantastic score in the cold and wet morning conditions for all those who qualified for the finals through the regional competitions.
Dwynwen Holgate from Cardigan continued her sparkling season with the runners-up spot, just edging Llantrisant and Pontyclun’s Sebastian Williams into third, both with 36 points.
Dwynwen and Pontardawe player Ioan Rowe finished tied at the top of the Order of Merit as a result of their performances in the regional qualifying events.
In the U12’s, William Pontin from Pyle and Kenfig, top of the Order of Merit in this age group, capped off a great season with another win.
An exceptional score of 65 points was enough to take the title by two points from Thomas Richardson, with Rhondda’s Ethan Langley in third with 62.
The Glamorganshire’s Paul Reid clearly enjoyed the Wrexham course, winning the U10’s age group with 64 points, just ahead of Thomas Loynes in second place and Cameron Hughes from Ross on Wye golf club in third.
Fallon Sawyers-Grandon won the Order of Merit in this age group following a series of strong results in the qualifying events.
Danny Wignall from North Wales Golf Club, winner of the last of the qualifying competitions for the U8’s, doubled up on that success with another fine performance at Wrexham.
Danny’s score of 55 points placed him tied at the top with Wernddu’s Alicia Kelly with Danny taking the prize due to a better score over the last 3 holes.
Milford Haven’s Tomas Carlson was just a point further back in third and received the Order of Merit prize following his three wins in events earlier in the season.
David Wilson, Wales Golf Championship Manager, said, “We have had a brilliant end of season final to the Ping Welsh Junior Tour with some tremendous golf being played.
“Our thanks goes to Wrexham Golf Club for hosting the event and also to our partners Ping for all their support. We look forward to developing the Tour further in 2019.”