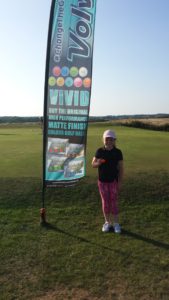 More than 300 young golfers entered this year’s Wales Mini Masters – a record number – with the final at Celtic Manor still to come at the end of the month.
More than 50 clubs from around Wales were represented in the competition, which has proved a breeding ground for many of the top players.
It is supported by Wales Golf and The Celtic Manor Resort as part of the continued legacy from the Ryder Cup in Wales, along with Volvik,
The largest area of growth has been in the number of girls taking part in the event, which reflects the schemes put in place by Wales Golf.
There were also more venues taking part than ever before, an improved standard of play and an event held in Pembrokeshire for the first time.
The benefit of the Mini Masters was emphasised this year with the success of former winners, Lea Anne Bramwell became Welsh Ladies Amateur champion, Tomi Bowen the Wales Under 16 champion, while two former finalists competed in the Under 14 category with Kasumi Tran beating Zak Baker to become champion.
“2018 has been an excellent year for the Wales MIni Masters with the number of entries increasing by 50%,” said event organiser, Andrew Jones.
“The increase in numbers is linked to the increase in the number of venues from five to seven. We would hope to increase that to eight next year with an extra event in North Wales.
“Young golfers learn the many skills required to play golf from professionals all across Wales. The aim of the Mini Masters is to provide a fun environment where they can put those skills together.
“2019 will bring the 10th season of the Mini Masters. Since inception, the event has been truly open to all with many disabled golfers taking part – and winning.
“Wales international Lea-Ann Bramwell is just one of the growing number of Welsh Mini Masters players who have gone on to achieve success in their young golfing careers.
“Many of the younger Welsh squads have considerable representation from players who have participated in the event.”
The Welsh Mini Masters finals will be played at Celtic Manor on October 30th.

Picture caption: Megan Maitland Williams from Pennard. Megan was the winner of the Volvik Challenge at Pennard and winner of her age category. Megan is aged 10.