The clue is in the name for North Wales golf club – taking a wider view to become a community club for the area has helped them become Wales Golf Club of the Year.

In a nice double for the North Wales region, Ruthin and Pwllglas chairman David Oswyn Roberts being presented with the Volunteer of the Year Award in a 2018 Welsh Golf Awards ceremony in the 2010 Clubhouse at Ryder Cup venue Celtic Manor.

North Wales have increased membership by 237 over the last two years, with the average age of playing members dropping from 62 to 47 years-old, also becoming a Golf Foundation HSBC Golf Roots Centre.
The club coaching team provides either free or low-cost lessons to approximately 250 children a week, including those with disabilities with almost half being girls. It is also a Wales Golf Girls Hub club.
North Wales general manager Phil Beard said, “I think it is just fantastic recognition for North Wales golf across the board. Most of the clubs in North Wales have seen that we have been developing as a club over the last three years.

“A lot of our members will be shocked because a lot of the good work goes on behind the scenes. It is a tremendous opportunity for the club to actually shout about something and get the members behind what we are doing.
“We have had a tremendous growth over a short period but the challenge now is to continue that growth and to raise the profile, not just for our club but for North Wales golf as a whole.
“We are already working with two or three other clubs to try and help develop them, assistant pro Robin Hughes has been putting coaching programmes into other clubs trying to bring the kids along.
“We do not just see North Wales golf club as just our club, it is about developing the game of golf across the North Wales region.

“The focus for us has been developing as a community club which is open to anyone. The key to me is making sure we are accessible to anyone who wants to participate in the game of golf.
“Our schools programme is out there, including young people with disabilities, we know a lot will never join but the experience of playing this game is something we should be offering to everyone.
“Our big drive for women’s golf this year will be focused on the social opportunities, rather than playing. We are targeting getting 150 women socially active at the club and from there we will get a few who move into our New2Golf programmes.”

Ruthin and Pwllglas chairman Roberts has been involved at the club for more than 50 years. “It is nice to get recognition,” he admitted.
“It is nice of Wales Golf to acknowledge all the volunteers at every single club.
“My favourite part has been working with other enthusiastic people. I have played a role, especially over the last 10 years, but having a good team around me is the thing.
“When you get good people around you it is quite an easy job. Younger people will come through and take over from me as they get more time.” 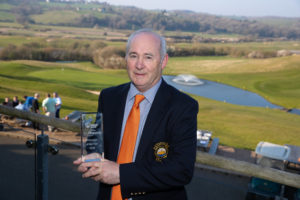