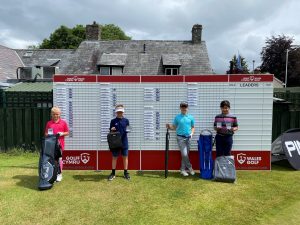 Many of the best young golfers in Wales have now reached the halfway stage of the PING Welsh Junior Tour, with only three events left to see who will reach the final at Mold in September.

The third event this year was held in Builth Wells with Iosi Russell of Pyle and Kenfig coming out on top in the U14 category to cement his place at the top of the Order of Merit with three events left to go.

The first of those will be in Caernarfon this weekend as the PING Welsh Junior Tour returns to normality after a year away, offering a series of golf events all round Wales for players up to the age of 14.

“Congratulations to all the players in Builth Wells, it is just so nice to run this series after last year, where some good golf and fun are the order of the day,” said Wales Golf event co-ordinator Daniel Fullager.

“We have reached the midway stage with three events having been held and three to go, but there is still time for players to gain qualification for the finals in Mold as part of Wales Golf Finals Week.

“We would also like to thank all the volunteers at Builth Wells who helped out in all sorts of crucial ways such as ball-spotting, marshalling and starting. They always play a vital role in making the event competitive and fun for the children.”

Thomas Carlson of Milford Haven won the U12 category, again cementing his place at the top of the Order of Merit.

In the U10 category Prestatyn’s Ricky Mohun came out on top, with Monmouthshire’s Oliver Hulbert second as he retains his lead over Mohun at the top of the Order of Merit.

In the U8 category Esme Matthews of Swansea Bay was third, leading girl and remains top of the Order of Merit. Clubmate Macsen Dyer won in Builth Wells to move up to second overall.

Mold’s Henry Tonks was second in Builth Wells, third overall, to strengthen his hopes of appearing at his home course in the finals.