The 2019 Welsh Ping Junior Tour was welcomed to Mold Golf Club, who once again hosted the first event of the season. Eighty Junior Golfers across the four categories (U14’s, U12’s, U10’s and U8’s) were greeted to calm conditions at the beautifully presented Mold Golf Club. It was great to see some familiar names and some new faces join us to do battle for the prizes on the day and fight it out for qualification for the Tour final and Order of Merit awards.

For those not familiar with the format of the Ping Welsh Junior Tour the U14’s category is open to golfers with CONGU handicaps, that meet the entry requirements, and they play 18 holes using the stableford scoring system. The three lower age groups players don’t require handicaps, and play nine holes of modified stableford over a shortened course. All the competitions are mixed, with prizes for the top 3 and the leading male and female players in each category.

The U14’s were the first age group to set out onto the course in chilly conditions and we were treated to some excellent scoring. Mold Golf Club had a number of players supporting this event at their own course and Aled Proffitt had thought his 41 points might have been enough to take home glory. However, he was beaten by a superb score of 43 points by Sebastian Williams (Llantrisant & Pontyclun Golf Club). Sean Moody (Padeswood & Buckley Golf Club) completed the podium finishing with an excellent 40 points. Annabel Collis (Mold Golf Club) ensured the home club’s thriving junior section was represented in the prizes again, by playing steadily to record 33 points and pick up the leading girl prize.

In the U12’s William Pontin (Pyle & Kenfig Golf Club) picked up from where he left off last year by taking another win in the Ping Welsh Junior Tour. He certainly had to work hard for it as his points total of 67 was matched by Aaron Mohun (Wrexham Golf Club) with William just sneaking the win on a tie break. Isaac Jones (St Giles, Newtown) took the final spot on the podium with 64 points. Lowri Davis (Mountain Ash Golf Club) picked up the leading girls prize with a great effort to finish on 53 points.

The U10’s was extremely hotly contested with the top six separated by just 3 points. Fallon Sawyers-Grandon (Swansea Bay Golf Club) played exceptionally well and managed to separate himself from the chasing pack to finish on 64 points just a point clear of 2nd 3rd and 4th. The three way tie break for 2nd was won by Tomas Carlson (Milford Haven Golf Club) with George Ledsham (Mold Golf Club) taking the final step on the podium from Jacob Price (Gower Golf Club) with all three finishing on 63 points. Hollie Sigsworth         (Mold Golf Club) was the proud recipient of the leading girls medal in the U10’s, finishing on 55 points. 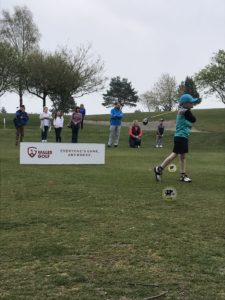 Six golfers contested the final age group in the U8’s as they ventured out onto the course  in the best of the conditions. Albie Walker  (Prestatyn golf club) making his debut on the Ping Welsh Junior Tour, produced a very impressive display to finish on 66 points and record a clear winning margin. One to watch for the rest of the year! Oliver Hulbert (Monmouthshire Golf Club) recorded a mightily impressive 61 points to finish second, winning another tie break over Ricky Mohun (Wrexham Golf Club) who took the final position on the podium.

Our thanks go to all competitors, including the parents/grandparents/guardians that took the time to bring them and let them enjoy the day. Ping, for helping us to run this fantastic tour and of course Mold Golf Club who once again helped us open up the 2019 season in brilliant style. We look forward to returning next year.