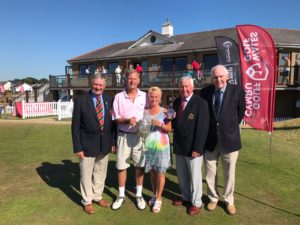 Investment banker Rupert Kellock enjoyed his first big win by picking up the Welsh Open Seniors title in Pennard.
Nigel Evans, from St Mellons just outside Cardiff, was one of three runners-up, four shots behind, and also won the over 60’s category.
Sunningdale member Kellock, aged 57, bounced back from a triple bogey on the third to be the only player under par on the hard and bouncy links course near Swansea.
Although this was his first victory outside of club competitions, Kellock finished fifth in the British Seniors last year and fourth in the English Seniors this year to show good form coming into the event.
“I took the view that the secret to playing Pennard, which I think took everybody two days to work out, was that you are better off being 100 yards from the green in the rough than 150 yards away in the rough so I took driver on most holes,” said the R&A member, who still works full time for HSBC.
“That made it easier than trying to hit rescue clubs off the tee, I just belted it as hard as I could. The greens are quite small so if you could get on them, you were never too far from the pin.
“I had some bad experiences in the rough, but on the whole I drove the ball very well today and yesterday.”
Although Kellock led into the final round and won by four shots, his progress was dented by a triple bogey on the third and also when playing partner Richard Darlington, of Wildernesse golf club in England, pulled within a shot with two holes to play.
“I was lulled into a false sense of security by a birdie on the second, but the triple bogey on the third woke me up a bit,” said Kellock.
“I thought if I could get it back to level par after that then I would be all right, which is how it turned out.
“Then Richard had birdie on 15 and nearly eagled the 16th to pull within one shot. He was brave enough to go for the green in two on 17, missed left and ended up with a nine while I managed to get a birdie.
“I had a four shot lead going up the last, which is what you want.”
Next up is the British Seniors Open a few miles along the South Wales coast at Royal Porthcawl.
“I took the chance to play there on the way down here and will play there again on the way back, so I am looking forward to that,” said Kellock.
“And then the Welsh Seniors is in Wrexham next year so I am already looking forward to that.”
Wales Golf championships manager David Wilson added, “Congratulations to Rupert, the only player who managed to get under par on a typical links test at Pennard.
“The course was in lovely condition, hard and fast, so thanks to everyone at the club for helping to make this championship such a success.”
Picture captions: Rupert Kellock with the Welsh Seniors Open trophy.
L-R – Wales Golf president Jeff Harries, Rupert Kellock, Jackie Cleverly, Pennard captain Mike Bennett, Pennard president Norman Thomas