Fallon Sawyers-Grandon (Swansea Bay Golf Club), kept up his winning ways as he made it three from three in the U10 age category at event three of the Ping Junior Tour at Llantrisant and Pontyclun Golf Club.

A cool day greeted over 110 junior golfers at the beautifully presented golf course near Cardiff as they set out to do battle over the tricky, undulating terrain that typifies this course.

In the U14 age group, Kian Orford (Llanwern Golf Club) took the top prize with an excellent 42 points. Sebastian Williams (Llantrisant & Pontyclun Golf Club) made the most of his local knowledge to take the runners up spot scoring a very creditable 39 points, which has also moved him to the top of the U14 order of merit table. Kian Evans (Llantrisant & Pontyclun Golf Club) ensured that the local players filled the final spot on the podium winning a 4 way countback with 38 points. Elin Tynan (Minchinhampton Golf Club) took home the top girls prize for the second time this year with 37 points, as she looked forward to her first appearance in the Welsh Ladies Amateur championships the following week.

William Pontin (Pyle & Kenfig Golf Club) was also defending a 100% record in the U12 category of the Ping Junior Tour. However, he had to settle for second on this occasion with Owen Williams (Glamorganshire Golf Club) producing a superb performance to come home with 67 points to Pontins 62 also taking home the top boy award. Additionally, Thomas Edwards (Builth Wells) took the final spot on the podium with 58 points scored whilst Sofia Benitez (Celtic Manor) took the top girl award with 53 points good enough for 7th overall. 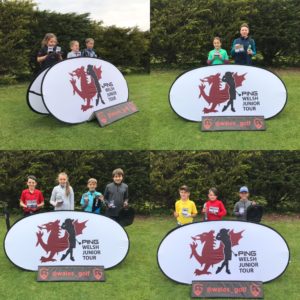 In the U12 category, Sawyers-Grandon swept up top spot and top boy with another excellent performance scoring 67 points. Casper Janse van Rensburg (Celtic Manor Resort) playing his first event on the Ping Junior Tour after the family had just moved to Wales from South Africa proved to be Fallon’s closest challenger scoring 64 points. Jacob Price (Gower Golf Club) took third position on 59 points coming out on top of a three way countback as Alicia Kelly (Wernddu Golf Club), also on 59 points, just missed out on the podium. However, she did take home the top girl award in an excellent 5th position overall.

A small field contested the U8’s competition with Oliver Hulbert (Monmouthshire Golf Club) proving to be the outstanding player on the day with a superb 62 points taking a clear win and the top boy award. Another local player, Cameron Gittins (Llantrisant and Pontyclun Golf Club), won out on countback to take 2nd spot from Alana Penny (Swansea Bay). Both finishing on 34 points with Penny also taking home the top girl award.

Our thanks go to Llantrisant and Pontyclun golf club for being so accommodating, to all the competitors, including the parents, grandparents and guardians that took the time to bring their children and let them enjoy the day. We would like to further send our gratitude to the volunteers who helped run the event and extend our thanks to Ping, for helping us to run this fantastic tour.