May 22, 2018.
(For free to use pictures please download from the following link, picture captions at the end of the article https://we.tl/LbfQiAiD0Q  )

Nearly 80 golfers between the ages of 6-14 made the trip to Mid Wales for the third leg of the Ping Welsh Junior Tour at Lakeside Garthmyl.

The Ping Welsh Junior Tour is one of the mixed gender competitions in Wales at the younger age groups, with separate girls prizes as well, shown by Ffion Richardson of West Lancashire finishing third in the Under 8s category and moving up to second in the Order of Merit.

Ashburnham’s Tomos Evans made the most of the ideal playing conditions to win the U14s age group with a fine score of 42 stableford points.

Wales Golf championship manager David Wilson said, “This nine hole course is a real gem, it’s not too long and every hole presents a different challenge.  “We love bringing the Ping Welsh Junior Tour to Lakeside Garthmyl and from the feedback we receive it is one of the favourites amongst the players.”

Pushing Tomos all the way in the U14s, Owen Warwick from Abergele, also with 42 points, came in second with Pontardawe’s Ioan Rowe in third with a score of 40. Lottie Raymond of Llanwern was the top girl.

The Order of Merit is wide open in this age group with Owen, Ioan and Dwynwen Holgate from Cardigan all tied in first place after three events.

Harry Ledsham from Mold followed up his season opening second place by going one better in the U12s, 63 points enough to win by a couple from Wrexham’s Aaron Mohun in second and Charlie Boys in third.

Another consistent performance from William Pontin keeps him in top spot in the Order of Merit table closely pursued by a group of players in a very competitive age group.
In the U10s, Thomas Loynes from Glynneath recorded his first ever Junior Tour win with a great score of 61, good enough to edge out the Mold pair of George Ledsham in second and Joseph Hancock third.

This win takes Thomas to the top of the U10s Order of Merit with George and Joseph tied in second as these three players set the early pace in this age group.  There is no stopping Milford Haven’s Tomas Carlson in the U8s, where he has played three, won three!  However Abergele’s Gethin Hatcher was only a couple of points behind in second with Ffion Richardson in third just a point further back.

Tomas’ exceptional start to the season gives him a commanding Order of Merit lead with Ffion in second and St Pierre’s Oliver Hulbert third.

The Junior Tour takes a break for a few weeks before mid-summer events at Carmarthen and Abergele give players more chances to win Order of Merit points to help them qualify for the season ending Tour Final at Wrexham Golf Club. 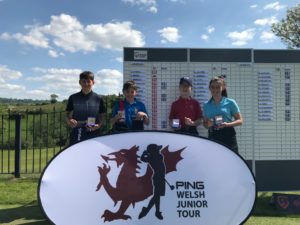 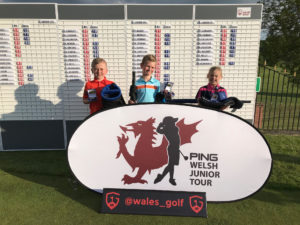