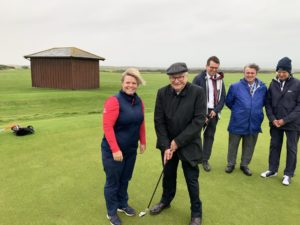 The Legacy Project as part of hosting the 2021 AIG Women’s British Open is aiming to build on the benefits for Welsh golf of having hosted world class golfing tournaments, including two Senior Open Championships and the 2010 Ryder Cup.

This time around the best lady golfers in the world will be competing at Royal Porthcawl in 2021, in one of the game’s Major Championships, with Welsh Government, Wales Golf and the R&A today (Friday) officially launching the Legacy Project at the links course.

Representatives of Royal Porthcawl, Bridgend County Borough Council and Conwy Golf Club, hosts of the 2020 Curtis Cup, were also part of the launch, where Royal Porthcawl became the latest club to sign the R&A’s Women and Girls Golf Charter – Conwy having been the first in the world to sign up.
Ladies European Tour star Lydia Hall was on hand to help coach some girls from Bridgend schools, an example of the development opportunities ahead.

As a direct result of hosting two of the top events in women’s golf, the professionals in Royal Porthcawl and amateurs in Conwy, 4,800 young people will get the chance to try golf and progress within the sport in 2020.
Those programmes will build through 2020/21, with opportunities to attend clinics held by world class players, there would also be tickets for some of the participants and transport to and from the events for both the AIG Women’s British Open and the Curtis Cup in Conwy golf club.

After the two events have been held in Wales, the aim in 2022 will be allow schools to embed a Tri-Golf course into their facility to ensure golf is a long-term element of their physical activity, working collaboratively with local golf clubs.

Wales Golf will also run an annual Legacy Championship, the first of its type in Wales, as a competitive event which integrates all genders, to inspire golf clubs in Wales that golf really can be ‘Everyone’s Game, Anywhere.’

Deputy Minister for Culture Sport and tourism, Lord Dafydd Elis Thomas, said, Both the Women’s British Open and the 2020 Curtis Cup provides us with an excellent platform to raise women and girls participation in golf.
“The benefits of hosting such major events will be felt throughout Wales before, during and after the events themselves. I am delighted this work is now underway with our partners.”

Wales Golf chief executive. Richard Dixon, added, “Hosting world class golf events has had a huge, ongoing impact on the development of golf in Wales.
“As part of the Ryder Cup bid for example, the Men’s and Ladies Unions became the first in the UK to merge fully into what is now Wales Golf.

“Golf Development Wales was set up, which is now the development arm of Wales Golf. The work they have done with clubs has seen an increase in club membership across Wales in the  last year for the first time in many years.

“Hundreds of thousands of people have been through Wales Golf schemes since the Ryder Cup. Last year saw a 14% increase in the number of New2Golf participants, more than half female and with record numbers converting to club membership.

“It is safe to say that Wales’ continuing ambition to host world class golf has made a lasting impression, but now the task is to achieve more thanks to hosting the AIG Women’s British Open.

“We have set ambitious targets over the next two years and beyond. Now we have to meet them, but there are some fantastic opportunities to help inspire women and girls in Welsh golf.”